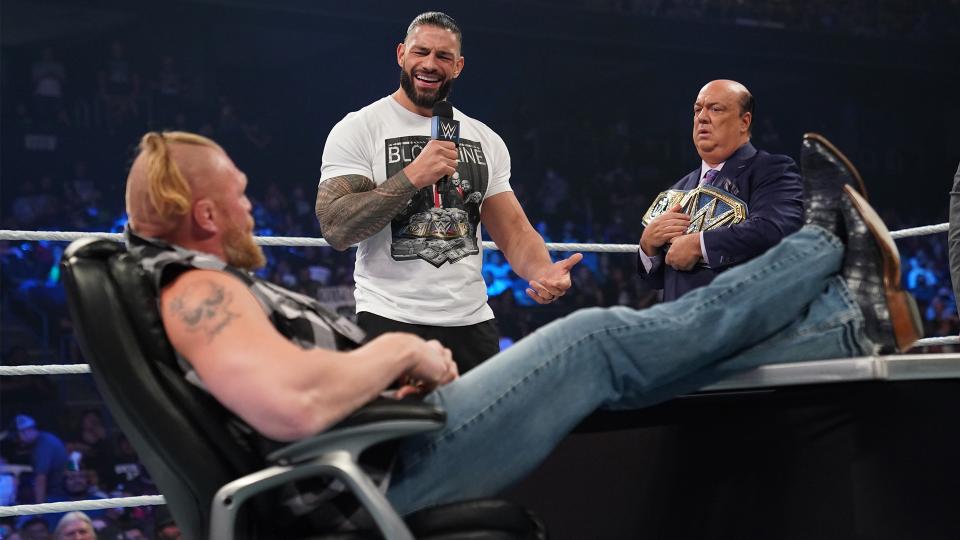 This new episode of WWE Smackdown Special “Supersized” opens this Friday, October 15, 2020 live on FS1 from the Toyota Arena in Ontario, California. WWE Hall of Famer Edge enters the ring. With the microphone in hand and sitting in a chair, Edge talks about his rivalry with Seth Rollins that dates back several years.

Regresa says that Seth has violated his family’s privacy by entering their home. Edge has underestimated Seth in the past and that’s why he lost to him, just like Seth underestimated Edge and that’s why he lost. Rollins watches the promotion behind the scenes. Edge says he was wrong to call Seth “Edge Lite” because he isn’t, he’s Seth Freakin ‘Rollins. There should be no doubt that their rivalry will end in their Hell in a Cell. In Hell in a Cell, he will scarify Rollins’ soul and it is a scar that will never heal.

Balor assigns the Coup de Grâce to Zayn to clinch his shoulders to three and get his ticket to the KOTR Finals at Crown Jewel. He will face Xavier Woods or Jinder Mahal.

While Naomi had to face Deville one-on-one, the official was accompanied by Baszler and the match thus became a 2v1 Handicap. Although defending herself as best she can, Naomi is unable to face her two opponents. Baszler assigns him the Kirifuda Clutch until he loses consciousness, then lets Deville just pinch with his foot.

A thumbnail “soon” of Hit Row is playing.

Seth Rollins is in the ring responding to Edge’s promotion early in the evening. Seth laughs that Edge tried to convince himself and the public that he would defeat him at Crown Jewel. Seth claims that he is not afraid to face Edge in a cell hell. She is better than him and has manipulated the master of manipulation, proof of her advantage over him. Seth is not afraid to face Edge in a HIAC, he repeats. He has spent more time in this cage than Edge, he knows how she transforms a person. He is the man he is today thanks to this cage. Edge is right, he’s the visionary, he’s Seth Freakin Rollins.

Wanting to stick the mask to her face, Carmella is surprised by Liv Morgan at ringside. He quickly returns to the ring and Vega takes the opportunity to roll up for the final count and get his ticket to the final of the tournament. There he will face Doudrop or Shayna Baszler.

A thumbnail will be released to promote Sheamus’ arrival on Smackdown next week.

Jimmy and Jey assign a double frog touch to Angelo Dawkins at the count of three and take the team belts.

From outside the ring, Belair hits Lynch’s arm with her hair, distracting Lynch and letting Banks summon the Backstabber for the count of three and victory.

Immediately after the game, Adam Pearce steps into the ring to order the technical team to prepare a table and chairs for the signing of the contract between Roman Reigns and Brock Lesnar.

In the company of Paul Heyman, the Universal Champion makes his entrance to the ring. It is followed by the arrival of Brock Lesnar, who in turn sits at the table. The two men look into each other’s eyes for a long time. With a wave of his hand, Reigns asks Heyman to review the contract, and Heyman does. Heyman takes the mic and tells Reigns that everything is fine and that he can sign the contract. Lesnar laughs in front of the stage and then takes the contract by signing it without even looking at it.

Reigns tells Lesnar that he must be an idiotic farmer for signing a contract without even reading it. Lesnar laughs and says he already read the contract this morning… With his lawyer Paul Heyman. Reigns quickly loses his smile but Lesnar keeps it and leaves the ring to conclude the segment and this episode of WWE Smackdown.