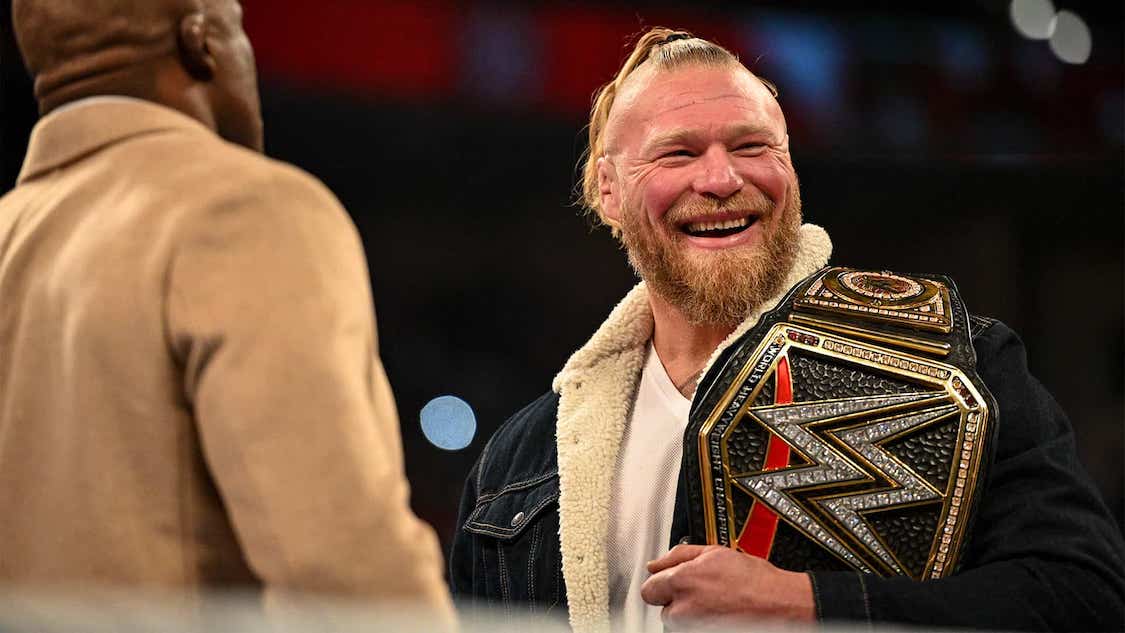 On the program of this episode of WWE RAW on January 10, 2022, Randy Orton and Riddle defend the team titles, Beth Phoenix is ​​the guest of a Cutting Edge and the challenger of Becky Lynch is designated for WWE Royal Rumble 2022 in a triple – threat in the main event.

Brock Lesnar opens this episode with acclaimed Philadelphia audiences Paul Heyman. During this time we see Bobby Lashley backstage who explains to Cedric Alexander and Shelton Benjamin who came to congratulate him on his place as a challenger that Hurt Business no longer existed and that he no longer needed them.

Lesnar is still in the ring, Bobby Lashley interrupts him entering. He’s happy to finally be able to do this match because according to him, Brock Lesnar has been avoiding him for twenty years, running from him. But Lesnar doesn’t seem like that and makes him understand that he had never met him until January 1 on Day 1, explaining that for the past 20 years he had been busy winning titles in this ring and beyond – Lashley still won the title last year. , we can no longer forget.

A segment that in any case again shows how hard this opposite Brock Lesnar works and is more inclined to take the microphone. The Lashley “knock knock who’s there” joke is perfect.

The WWE Champion leaves the ring proud of his joke, then Alexander and Benjamin take the opportunity to attack their former leader Lashley – who will not have too much trouble getting rid of them.

Randy Orton starts to have a little problem with Riddle, whom he accuses of being the cause of last week’s loss. We’ll have to agree, they defend their RAW Tag Tag titles against Otis and Chad Gable in the next game.

Alpha Academy defeated RK-Bro by falling with Otis’s World’s Strongest Slam on Randy Orton. The blame will return to Riddle who could not avoid the pinfall in time.

Chad Gable and Otis are now tag team champions so it will take us a while to get the hang of it without ticking. We’ll say we’re happy for Gable, WWE will never know what to do with him alone anyway.

Damian Priest is ready to compete in the Men’s Rumble Match before his Street Profits tag team match against Apollo Crews, Dolph Ziggler and Robert Roode.

Seth Rollins is eager to be at WWE Royal Rumble 2022 to become the Universal Champion. He explains that he did not have the fight thanks to Paul Heyman (a “lawyer who looks like a penguin” as he calls him) but because Seth is “cursed” Rollins, and intends to beat Roman Reigns.

Big E interrupts and makes clear his intentions for the next few weeks: he will enter the Royal Rumble, win it and face and defeat Seth Rollins at WresleMania 38. One fantasy reserve which makes Seth Rollins laugh, who tells him he has no chance and offers him a chance tonight, a match, right away.

Seth Rollins as Battu Big E by fell with his Curb Stomp. Good game and third heel win of the night in three games. We understand the intent, Rollins is the Universal title challenger, but does Big E need to lose a second game now?

Nikki ASH and Rhea Ripley don’t get along anymore. The former wanted to challenge the WWE Tag Team Champions to a Championship match, but Ripley clearly disagreed. Ripley obviously wanted to talk about the Rumble. It also makes Nikki ASH understand that it may be time to let go of the roads.

The two wrestlers argue over who is the better of the two in particular, but when she wants to leave the ring, Ripley suggests that they remain friends (difficult, the friend zone version of wrestling). Ripley still says she believes in her, and the two fighters hug. We have the impression of being too many in this segment.

But surprise, Nikki ASH ends up attacking Rhea Ripley hitting her before leaving the ring. “Almost superheroes don’t need friends” she lets go on the ramp. We’ll probably go through the rivalry box, but it’s clear that these two have to find a solo career, and Nikki ASH has to give up this character who serves her more than anything else, especially if she turns heel.

A segment around the 24/7 title notably sees Tamina covered in food. It’s Tamina’s birthday. Happy birthday Tamina. Reggie also crosses paths with Omos whom he bumps into by accident, it doesn’t turn out very well.

We beat Nick Sanders when falling with a Tree Slam. Let’s go back to squash for the giant, obviously.

Maryse is not ready yet

It’s avant-garde moment with Beth Phoenix as a guest. Edge sings Phoenix’s praises, music video plays, audience cheers for wrestler who thinks Edge is doing all of this for “later tonight”; You get it, the audience does anyway. Phoenix explains that she is fed up with Miz and Maryse and eager to end Royal Rumble.

Those interested make their entrance, talk about basketball and Ben Simmons to attract the warmth of the Philadelphia public and also offers his video clip on Maryse, the public appreciates less than for Beth Phoenix. The Miz then tries to sing the praises of his wife as well, who remains silent, before exiting the ramp to go backstage without Miz noticing. The couple does not coexist.

It’s a very heavy humor segment from WWE, a bit long for what it was heard, actually no longer than last week.

AJ Styles defeated Austin Theory by disqualification, Grayson Waller attacked Styles during the match while he was going to use the Phenomenal Forearm.

Waller will quickly explain behind the scenes that he did this to give an idea of ​​tomorrow’s match against AJ Styles on WWE NXT.

Alexa Bliss News: Not good at all. The fighter is in therapy, still in her possessed character. Therapy goes awry, Alexa Bliss breaks everything in the doctor’s office. Don’t you want to bring us the Alexa Bliss that everyone loves? We’ll pretend nothing happened, we promise.

The main event of this episode pits Bianca Belair, Liv Morgan and Doudrop in a triple threat match for the place of challenger to the title of RAW champion of Becky Lynch. The champion before the match puts the three fighters in her own way before saying that the winner will have the honor of telling her grandchildren that she was defeated by Big Time Beck.

Doudrop defeated Liv Morgan and Bianca Belair for dropped with his Banzai Drop on Liv Morgan. Bianca Belair could have won the match but Becky Lynch, installed in the comments, interrupted the pin (and since we are in triple threat, not DQ). Good game and a somewhat surprising victory for Droudrop.

Therefore, Doudrop will face Becky Lynch at WWE Royal Rumble 2022. Lynch joins her in the ring to offer her a handshake, before hitting her. She tries to bring him her Man-handle Slam, but it is not very effective. Doudrop throws him out of the ring to complete the segment.

An episode of Monday Night RAW without much interest. The opening segment with Brock Lesnar and Bobby Lashley is entertaining, Otis and Gable’s win is surprising, Rollins and Big E had a good game, the main event is nice, but the episode and its many segments seem too long, too long .