From Sunday April 18 to Sunday April 25, the French women’s water polo team chose the spa town to continue their training.

Water polo is a sport with very little media coverage, both for men and women. In Aix-les-Bains, the local club and its athletes, who train regularly in the new Aqualacette complex, give the discipline its letters of nobility. Thus, during the week of April 18 to 25, French athletes were also able to benefit from the new swimming pool to train before the restart of international competitions.

Due to the temporary closure of its training center, the Insep (National Institute of Sport, Expertise and Performance), the players of the French water polo team have chosen to take a week off from sports in the spa town. Despite not being selected for the next Olympic Games in Tokyo, the French women’s team does not stop training. Under the direction of their coach, Florian Bruzzo, the athletes underwent an intensive course at Aqualac, with almost 11 training sessions over 7 days to perfect their technique.

A program that combines sport
and discovery

During their week of presence, the players stayed at the Hotel des Alpes, in the heart of the city. When the players, all very young and from the four corners of France, were not training in the pools, they walked the hiking trails. Louise Guillet and Audrey Daulle, two experienced water polo athletes and team supervisors, had envisioned an intense sports discovery program. The players of the France national team thus alternated training and hiking in height. So they were able to enjoy the local panoramas. 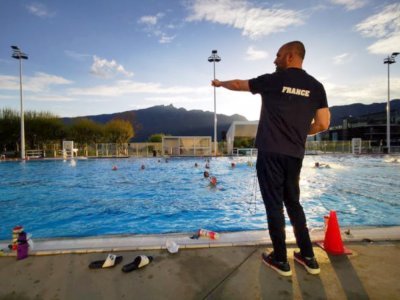