For Ligue 1 clubs; the first weekend of the year is synonymous with the Coupe de France. Last week Olympique Lyonnais was an exception and attended from afar the performances of other elite French football teams. An unprecedented situation after the club’s exclusion from the Coupe de France; like Paris FC; after incidents at the Charléty stadium; December 17.

Finally; OL will play its first game of the year on Sunday January 9 (8:45 pm); against Paris Saint-Germain (1st) at the Groupama Stadium. A match that promised to be a great scare at the start of the Championship but which; given Olympique Lyonnais’ ranking (13th) in the middle of the season; seems unbalanced. However; the opportunity is good for the Rhône club to set the bar; start 2022 well and confirm the laudable intentions of Jean-Michel Aulas.

In a video aimed at Lyon fans and released on December 25; the OL president was confident in his club’s ability to “To be at the forefront of the championship again. It is our determination; I am convinced of it”. “I wanted to tell you that we have everything prepared so that the second part of the sports season is a success at the height of our ambitions”; so Aulas had affirmed. But internally; the atmosphere has been more than bleak at the club for two months. “We are going through a time when everything is wrong; but we remain dignified and work to make things better.“testifies an OL employee who preferred to remain anonymous.

Before the truce; Peter Bosz knew it. “The 13th is not our place; and it is not our goal”; argued the OL technician. But the Rhône club occupies this disappointing position in the standings; the club’s worst in the 21st century at mid-season (Lyon have one game less). Since his arrival last summer on the Lyon benchThe 58-year-old Dutch coach is not putting his offensive paw on his team and his recent change in tactical system has had no real impact.

After an encouraging period between late August and mid-October; Lyon’s players seemed less proactive in responding to the coach’s instructions. Lucas Paquetá has physically slowed down and some executives; such as Xherdan Shaqiri who has disappeared from the radar; are far from meeting expectations. The game against PSG on Sunday night is therefore the time to recover.

Olympique Lyonnais and its president @JM_Aulas I wish you happy holidays!
❤️ pic.twitter.com/kba0MuuiE6

Especially since OL faces a difficult sequence: after Paris; Lyon will play the derby against AS Saint-Etienne in two weeks (January 21) and then against Monaco; Nice; Lens and Lille in February. The period promises to be tense for Peter Bosz. “We are very late to Ligue 1; but it is not prohibitive”; announced Classrooms in the columns of The team Dec. 24.

Aulas did not stop warning his coach before the holidays: “There is no way that Peter will not be here until the end of February. I will give us two months of January and February to return to the Championship.”“By then Bosz may no longer be OL’s coach. The sporting concerns of the Dutchman and his team began to surface two months ago; as sporting director Juninho was preparing to make a sensational press release.

Since December 31; Juninho is no longer an OL employee. Lyon’s sporting director; who arrived in July 2019; left the club at the end of a streak that started and that indirectly hurt his team. On November 17; on the airwaves of RMCJuninho dropped a bomb that its leaders had not foreseen: “There is a huge mental fatigue and I do not want to go over the limit. (…) Normally; it ends at the end of the season. I want to rest a little.”

The Brazilian; therefore; did not reach the end of the 2021-2022 financial year.. His announcement coincided with a bad run of results for the OL and above all put President Aulas before a fait accompli: the return of the former glory as a player (2001-2009) to the club was a bitter failure and the end of the romance caused internal turmoil. . “This game was a blow to morale. He embodied somewhere this last hope of bringing OL back to the forefront.“laments an employee of the club.

Therefore; Lyon decided to anticipate their departure and decided to restructure their sports organization chart. Bruno Cheyrou; arrived in 2020; has been appointed technical advisor and hiring manager; with less extended prerogatives than those of Juninho. Cheyrou can count on Alain Caveglia – who arrived to make up for the departure of the historic Patrice Girard – and Stéphane Henchoz; both recruiters.

This round trip grabs the supporters “;but we are not fatalists; the club is working well and the results will come eventually“; assures the OL employee. Despite everything; the club’s supporters from a Facebook group with 117;000 members sent an open letter to the OL last week to alert about the sports and institutional downturn observed this season while They stress that the club’s image has deteriorated considerably in recent weeks.

The club’s image damaged by the incidents

This is the last side of the nightmare that the Lyon manager has been experiencing since the start of the season. A part of French football that they would have liked to avoid; but that ended up catching them twice. On November 21; at the Groupama Stadium; Lyon fan hit OM player Dimitri Payet on the head; with a bottle. Interrupted match between the two teams; withdrawal of a firm point for OL and find to reproduce.

Stoppage of the match against Paris FC at the Coupe de France on December 17 it did not help at all: as incidents multiplied on the pitch; OL has been perceived for more than a month as the troublemaker. “You just have to read the media to see that we rarely talk about OL on good terms right now.“blows the club clerk. The media campaign directed by Pierre Ferracci; the president of the PFC; against the Lyon club; necessarily played. 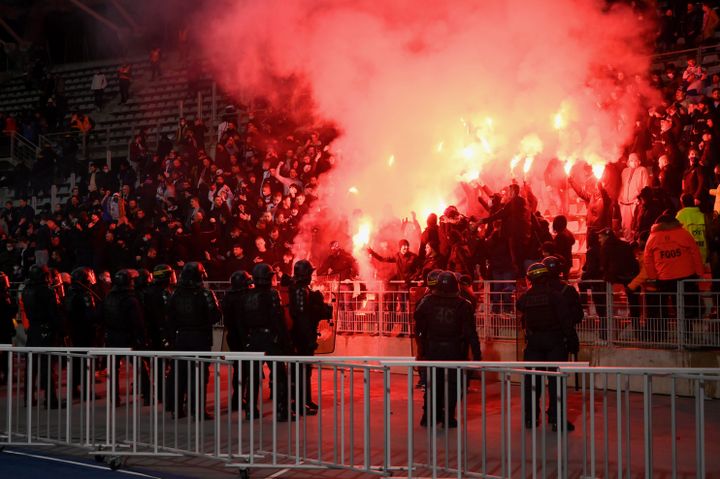 Violent incidents had broken out at halftime of the Paris FC-Lyon match at the Coupe de France; in Charléty; on December 17; 2021; leading to the stoppage of the match. (JULIEN MATTIA / EL PICTORIO / MAXPPP)

The image of the OL did not emerge completely unscathed from this sequence; as did that of Jean-Michel Aulas; whom his counterpart Ferracci found complacent about a fringe of far-right sympathizers. “The silence of President Aulas in the face of the attacks has allowed us to be in a dignified position. He could have answered her. And that ? Another war between presidents? By contrast; OLs have advanced in the post-PFC-OL period.“; analyzes the employee of the club.

Far from responding to the attacks; President Aulas and OL have been discreet and acted behind the scenes to punish the culprits. Thus; the club has sent letters to fans to prohibit them from entering the stadium; while the movement of Lyon supporters has been prohibited until further notice.

After these two more than difficult months; Lyon is therefore waiting for a relaunch. A win against PSG would launch the Lyon club’s year perfectly. But as nothing seems to be going in OL’s direction at the moment; the club will have to dispense with significant income from ticket sales and host PSG this Sunday and the ASSE in two weeks in front of 5;000 people only. Two games that are usually sold out.