Dance of the Dad, what is really behind this dangerous video

A post circulating on social media warns users about a virus lurking in a video called Dance of the Dad. According to the message, this virus could format our mobile phone. The truth is that it is more of a heated hoax.

Several of our French cousins ​​have seen their Facebook and WhatsApp flooded with this famous warning message about a dangerous video called Dance of the Dad.

“URGENT: Tell everyone on your list not to accept a video titled *DADDY’S DANCE. It is a virus that formats your cell phone. Be careful, it is very dangerous. Pass it on your list because people open it thinking it’s a joke. It’s being broadcast on the radio today. Pass them on to everyone you can.”

This is what the publication looks like in Dance of the Dad. Photo credit: Liberation.

Not wanting to do any harm, netizens shared the message to warn their loved ones. Only they have only spread more what turns out to be a hoax.

A hoax that seems to have changed its skin, since it took another form in 2015.

You remember a few years ago of this famous pope dance message? Well Dance of the Dad is the exact same joke, but with the name of the “dangerous” video changed. 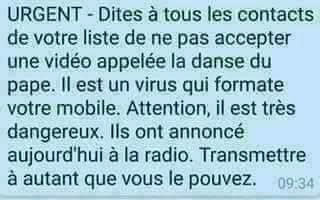 This is the message that we were able to read in 2015 about the Pope’s dance.

At that point, I explained to him that there was no dangerous papal video.

It is the same case of Dance of the Dad, as confirmed by computer security experts from the firm VirusKeeper in France. Break free that it is a hoax and that there is no virus as stated in the message.

In a case like this, it’s always a good idea to do some research before sharing with our friends and family. It’s nice to want to warn them about a potential danger, but you still need to make sure that the danger actually exists.

Warning against a contact for not accepting in Messenger