The global economy is expanding due to the development of the hydrocarbon sector, as has happened in the case of Colombia. This sector accounts for 2.5% of world GDP and 31% of the planet’s primary energy supplyprimarily for the production of liquid fuels contributing to sectors such as transport, industry or petrochemicals.

At this time, and despite geopolitical changes, the countries with the largest reserves are still Saudi Arabia, Canada and Venezuela, allowing them to become energy self – sufficient. According to the BP World Energy Statistical Review, 14 countries account for 93.5% of the world’s proven oil reserves. In the case of Venezuela, the nation contributes 304,000 million barrels, equivalent to more than 17% of the world’s reserves. Despite this high volume, production is being affected by the collapse of the industry in the country, which has reached about 697,000 barrels per day, a figure lower than Colombia ‘s current production of 751,000 barrels per day. the latest report from the Ministry of Mines and Energy. In the ranking of reserves, they follow Saudi Arabia, with 298,000 million barrels, and Canada with 170,000 million barrels.

Oil reserves serve as an estimate of the amount of economically recoverable crude oil, and it is important to note that these reserves must have the capacity to extract from existing technologies. 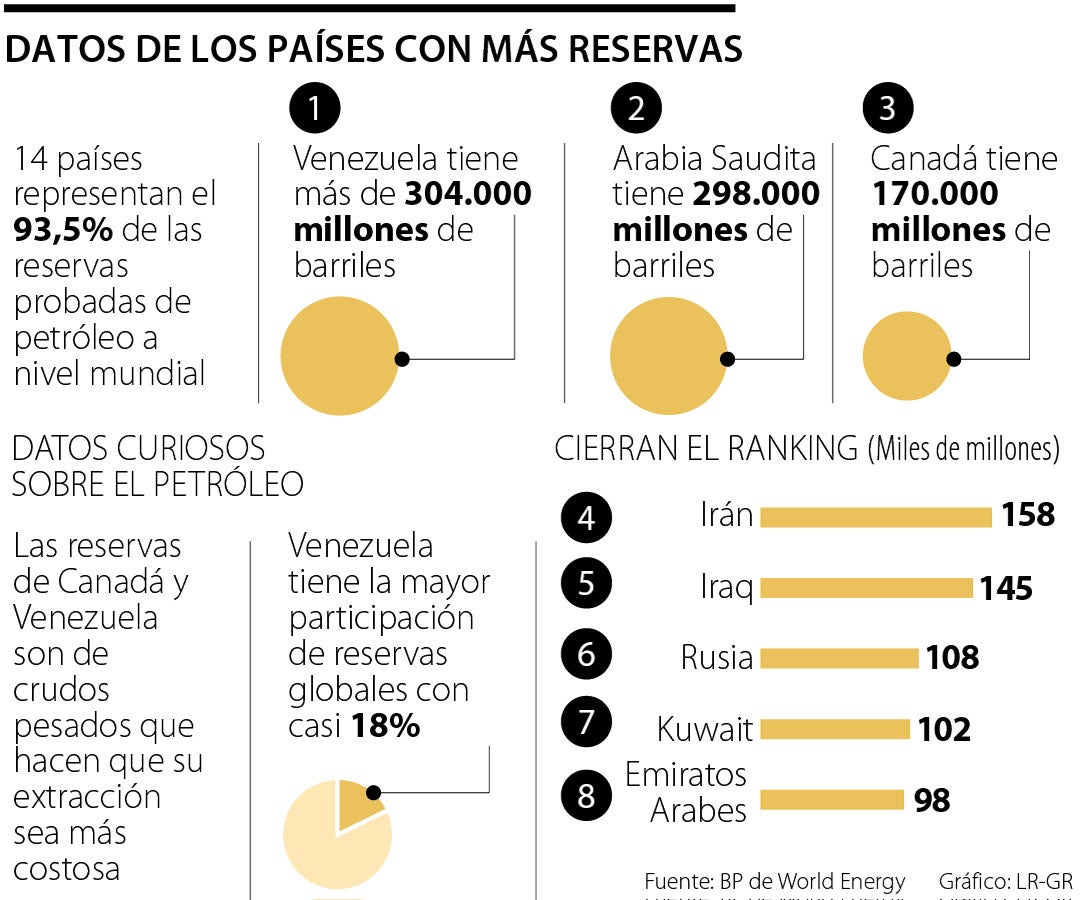 For Luis Guillermo Acosta, Executive Director of Acipet, it is important to clarify that Venezuela’s reserves are underdevelopedbut “these are amounts that are expected to be recovered from new wells in non – drilled fields, from the development of technology that allows oil to be extracted profitably, or as mentioned above, Venezuela’s internal regulatory context, which generates conditions for the development of hydrocarbons.

Currently andIran, Iraq, Russia, Kuwait and the United Arab Emirates complete the ranking of reserves. In the case of Russia, in addition to the reserves, it also has the technological capability to extract it.

Francisco José Lloreda Mera, executive president of the Colombian Oil and Gas Association, ACP, explained that it is important for the recovery of oil demand at a global level that “investor interest in hydrocarbon exploration and production (E&P) still; by 2021 alone, it is estimated that some US $ 351 billion will be invested worldwide. “

We must not ignore the war between Russia and Ukraine, which is why it is important to highlight that the sanctions imposed by the various countries on Russian oil imports and imports may have a greater impact. oil exports, this means to say. that various buyers of this supply have to look for new markets that can provide them with the necessary barrels to meet domestic consumption.

Acosta added, of course, that oil can once again be a factor in making alliances between countries more similar. “Russia’s global influence is highly dependent on its large crude oil reserves and supply, especially in Europe. Immediate sanctions on Russia’s gas supply would put Europe in a impending recession, which Europeans are unwilling to accept.

Finally, Lloreda explained that “the current state of global energy has established an unbelievable reality, which is that the world will continue to need hydrocarbons for several years, even decades.” He added that “in Colombia, figures from the national government show that even under the most ambitious decarbonisation scenarios, by 2050, at least 50% of final energy consumption will be covered by natural gas and liquid fossil fuels.”

This adds to the fact that energy security comes with investment. For example, in the case of Colombia, the hydrocarbon sector accounts for 5% of GDP and 40% of exports, generating revenue of $ 7.5 billion under the Medium Term Fiscal Framework, and possibly at current prices crude oil. increases. However, the country has significant potential for hydrocarbon resources; this is an opportunity to exploit the richness of the subsoil for economic development.