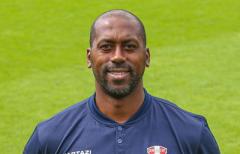 BEVERWIJK – Football association RKVV DEM from Beverwijk; playing in the third division; has appointed Mark de Vries as the new head coach for the 2022-2023 season. The 46-year-old trainer comes over from Kolping Boys. In Beverwijk he signs a contract for two years.

As a football player; the former professional played for FC Volendam; Chamois Niortais; Dordrecht’90; Heart of Midlothian; Leicester City; SC Heerenveen; ADO Den Haag; Leeds United; Dundee United and SC Cambuur.
After his football career; he started in 2015 as a striker trainer at FC Dordrecht. In 2020 he made the switch from BOL to Kolping Boys. De Vries will not renew his contract with first division team Kolping Boys and will take on the challenge next season at third divisionist RKVV DEM as successor to Kiri Kalaitzis.

In addition to his trainership at DEM; he will also continue to lead as a trainer of the women of VV Alkmaar. Mark de Vries about his appointment: “I know DEM as professional; organized and ambitious. This is the level where you want to be as a trainer. I will bring my experience as a football player; but I also find the fun; both on and off the field ; important.”

Mark van de Ven; chairman of DEM: “We are very pleased that we were able to find a successor for Kiri Kalaitzis in the short term. In the past; informative talks have already been held with Mark; but then we did not succeed in working together. We got to know Mark in the conversations; as a person who can combine sporting ambitions and the group process well.”

Tags:coachvries
previousBaselli Cagliari; the operation can be skipped: the latest
nextPSV simply puts Fortuna Sittard aside thanks to Doan and reports to the last sixteen | TOTO KNVB Cup