Most of René Lévesque’s public life has focused on his political commitment. The comic René Lévesque – Something like a great man, published at the beginning of December, takes a careful look at the ideas and transformations that he championed in the interests of Québec and keenly recalls the values ​​that guided him.

Moelle graphik is used to releasing comics out of the ordinary. The publisher Julien Poitras, who is also dean of the Laval University School of Medicine, does not publish books on a massive scale. He likes to design works that stand out for their craftsmanship and wants to “work each book according to its author and his aspirations.”

The peculiarity of René Lévesque – Something like a great man is that it was written by a person, Marc Tessier, but it is captured in images by a score of cartoonists. Christian Quesnel, Réal Godbout, Louis Rémillard and Sophie Bédard are among those who sign entire comic book chapters, while Jimmy Beaulieu, François Lapierre and Rupert Bottenberg are part of another group called upon to provide an illustration.

The idea of ​​increasing the number of designers is Marc Tessier himself. Julien Poitras came on board. He is aware that some readers may be drawn to one style and discouraged by another, but believes that the character’s “historical interest” acts like a portfolio.

“There is also a correspondence between the styles of the artists and what is told,” he defends, citing the spontaneous drawing of Jacob Doyon and the horrors that Lévesque saw in the Dachau concentration camp. The same happens in the last chapter, which talks about René Lévesque’s relationship with Corinne. [Côté-Lévesque] and that is very soft in the design of Sophie Bédard. It’s a great demonstration of what can be done with different styles. ”

Excerpts from René Lévesque – Something Like a Great Man

From war to politics

The album begins in 1944 when René Lévesque embarks for Europe as a reporter. Then we will follow him during the Korean War, from where he made notable reports, until he takes the helm of his own show, Point de mire. Little by little, man develops his vision of the world, reflects on injustices and pretends to be a decryptor of international problems. Little by little they feel the urge to make the leap into politics, eventually he will give in and join Jean Lesage’s team.

“We take René Lévesque’s point of view quite simply,” judges Julien Poitras, who found this project moving in several respects.

For me, he was an important politician. As an individual, I saw the emergence of the Parti Québécois and the first referendum, but I did not know the time of its war report and that of the program. Point of view.

He believes that comics can measure up.

René Lévesque – Something like a great man it’s a thick read. The emphasis is on behind-the-scenes games, which sometimes turn complex, especially in the episode commonly known as “the night of the long knives,” where the prime minister of Quebec is duped by other Canadian leaders’ support for the law. . Constitution of Pierre-Elliott Trudeau. The event is staged like a play, which, from the editor’s point of view, makes it more “digestible.”

What he wants to convey through this book is that it is possible to transform things. “When someone comes up with ideas and has the ability to convince, Julien Poitras believes, it is possible. ”

He also believes that the comic corrects an unfortunate situation in his eyes. “The tributes paid to René Lévesque so far have not been successful,” he said. We come to correct that a bit. The album depends on the man and, through this sharing of the work of many people, I believe that we are in line with the values ​​that he defended. ” 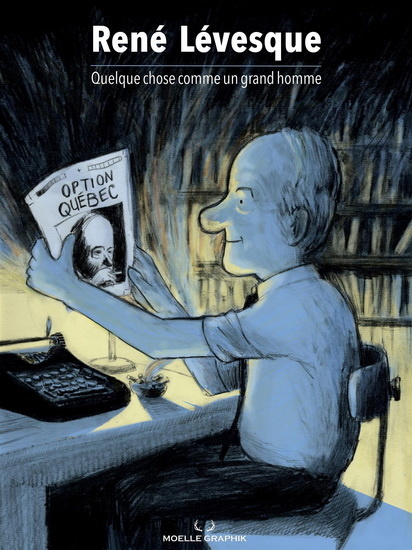 Tags:charactergreatheightlevesquesomething
previousLONAB Horse Grand Prix: The Strongest Bobo Horses
nextHandball: the Dakar League signs an alliance with Nice Cavigal, which will focus on the construction of a National Academy