T-Pain unleashed against streaming: is it justified?

T-Pain unleashed against streaming: is it justified?

We try to verify the figures.

Recent changes in the recording industry, with the advent of streaming, for example, raise quite a few questions. Starting with “cheat“, or buying streams, which increases your numbers and can propel you to Trending or get you to appear on certain playlists. But this trick, which is also a bit of promotion in disguise, isn’t the only problem: that of the remuneration of artists by platforms is also very important. T-Pain decided to put one foot on the plate in this.

The former rap superstar who has topped the charts in the late 2000s, took to Twitter to speak on this issue that concerns him. He began by publishing a table showing the different salary scales of all platforms, with theThe number of broadcasts a title takes to earn $ 1.. After a quick check on the internet, the numbers seem pretty true. Therefore, we learn that the platform that pays the best is Naspter with 53 plays to generate a dollar the current. The worst is YouTube, with 1,250 views to earn a dollar.

In fact, there is something to be a bit shocked, especially by the figures of YouTube, which is nevertheless one of the most used platforms in the world. In a message posted shortly after, T-Pain writing : “I see a lot of ‘well, I guess I’ll use the best (platform)’ and not ‘let’s do our thing’, keep that in mind, most artists don’t even earn all that. $ 1. I just want to show you what the reality. I worked for me, and there are a thousand ways if you do it right “.

I see a lot of “well I guess I’ll use the best one” and not “we have to do ours”. Keep in mind that most artists don’t even get the full dollar. I’m just letting the promising ones know what the real thing is. I worked for mine and there are many ways around this if you move well

It is true that not all streaming revenue always goes into the rapper’s pocket, which may have a tag, or some beatmakers to pay for. These numbers and facts are important to keep in mind when trying to get into music today. The consequences of these very light payments from most platforms is that artists were forced to be inventive to find other sources of income. I like it the stage and the showcases, or, in the days of CoVid, a return to physical versions with all the marketing going on, like with Orelsan’s latest album, “Civilization.” To add a little more documentation, we place just below the money you make from a single stream, platform by platform. And keep in mind that in addition to that, your sounds can jump platforms At all times… 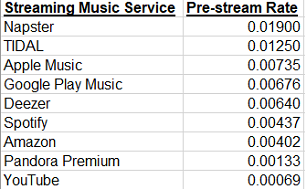 Tags:againstjustifiedstreamingunleashed
previousStikbold! A Dodgeball adventure is coming to Switch at the end of the month
next“Unachezaje Dance Challenge” in the footsteps of “Jerusalema”