In a world still quite masculine, Mireille Ajami detonates

In a world still quite masculine, Mireille Ajami detonates

Lebanese athlete Mireille Ajami is currently in full physical and mental preparation to participate in the Asian Powerlifting Championships that will take place from December 25 to 30 in Istanbul; Turkey. He trains two hours a day; six days a week – “working more would be too exhausting for my body;” says the interested party – under the supervision of certified trainer Hassan Koaik; also No. 2 of the Lebanese Federation.

Weightlifting is a non-Olympic sport cousin to weightlifting. It consists of three cumulative events: squat; bench (bench press); and deadlift. The goal is; as in weight lifting; to lift as much weight as possible.

Mireille Ajami – Mjay by her nickname on social media – with major recent achievements to her credit in weightlifting; has been riding the wave of success for nearly three years. In a sport dominated by men in Lebanon; the 38-year-old stands out (39 next February). Petite; petite but muscular; she was the first lady to embrace discipline in the land of cedars. Since then; thanks to her perseverance and performances; she has been emulated …

However; nothing predestined her for this sport. Free-spirited and rebellious; Mjay studied at the Dekouané School of Hospitality; then followed a course in Hotel Management at the American University of Science and Technology (AUST) in Beirut; Achrafieh; obtaining her BA (Bachelor of Arts; the equivalent to a license in the French university system). However; athletic at heart; she embarked on CrossFit; a fitness program that involves constantly varied functional movements performed at high intensity. Today; having obtained StrongFirst certification; Mireille Ajami is a professional barbell and strength and conditioning coach at the Skills Sports Center club in Beirut.

In addition; the young woman has twice won the title of “Strongest Lebanese” from the Lebanese Powerlifting Federation (2018 and 2019) in the -72 kg category. Then; in 2021; he broke the national record in the -63 kg category. -I challenged myself on the eve of the 2019 IPF (International Powerlifting Federation) world championships in Sweden; in the city of Helsingborg; to lose weight; says Mjay. Because the lighter you are; the better you will be at lifting heavy weights. ” 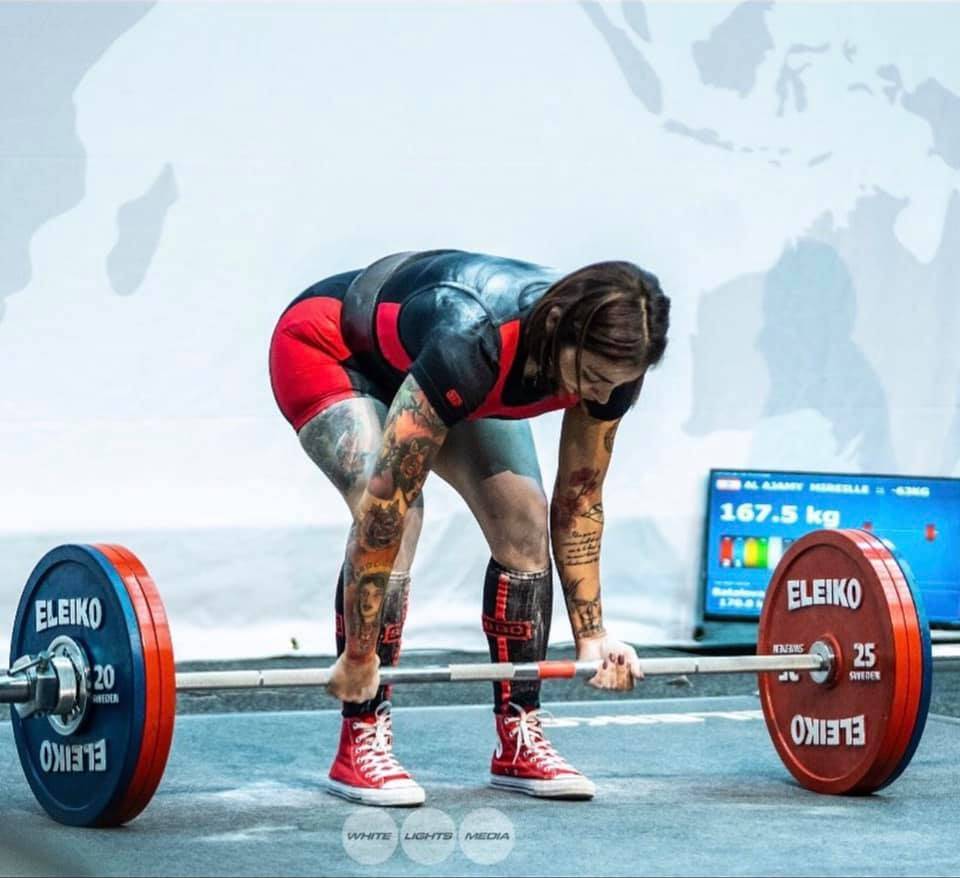 Powerlifters Stefi Cohen and Krissy Mae Cagney are a great source of inspiration for Mireille Ajami; “because they are independent and rebellious women;” she says. Photo taken from his Facebook page.

Challenge and source of inspiration

This single mother of two; a 14-year-old teenager and a 10-year-old son; continues her story: -I started as a CrossFit athlete in 2014 and won twojournaltimepetitions in Lebanon. It was then that I realized my strength to carry heavy weights; including squats and deadlifts. So I decided to focus solely on lifting weights. Then I joined the Barbell House in Gemmayzé (a weight lifting gym). The coaches immediately saw my potential as a weightlifter and were enormously supportive of my endeavors; providing the necessary advice and training for my development. They helped me so much that I ended up winning 1st place in the -72 kg category at the Lebanese Championships. And in 2019; I was the first Lebanese weightlifter tojournaltimepete internationally; at the IPF World Championships in Sweden; in the -63 kg category. He was 11th in squats. ”

When asked what she finds most challenging in her sport; Mireille Ajami replied that -less than a decade ago; it was considered taboo for women to practice it in Lebanon. In a male-dominated environment; it was a challenge for me to prove myself as a female weightlifter and shine in front of the gentlemen; as for a long time I was the only female representative in this sport before others followed in my footsteps. ” Reaching the International Powerlifting Federation world championship in June 2019 was something very important to me; “says the young woman. And;” In addition to my professional achievements; it is a great feeling to empower women; those who have followed their example. and others; and to show how strong we can be; literally; “continues Mjay with a smile.

She adds that raising her two children alone “is also a challenge”; because it is not easy tojournaltimebine her condition as a single mother with that of a professional athlete and sports coach. In fact; you often have to take time off to travel abroad in order to participate in internationaljournaltimepetitions. Pour Mireille Ajami; deux femmes dynamophiles sont sa grande source d’inspiration: la Vénézuélienne Stefi Cohen; installée aux États-Unis; et l’Américaine Krissy Mae Cagney; «it seems that they sont des femmes indépendantes et rebelles»; assure-t- her.

What if a person wanted to practice weight lifting; what would you advise as a professional trainer? -First of all; it is imperative to learn the basics of the sport. It’s important to master correct squat; bench; and deadlift techniques to avoid injury; –says Mjay. -I have students of different ages and levels; in Lebanon and abroad; as I also offer online courses and training programs. Most of them are eager to fight. I always advise them to be patient and applied; to do things correctly and gradually so as not to seriously injure themselves; because afterwards it is difficult to recover. They also need tojournaltimemit to a good coach who can guide them in their progress; –concludes the champion.

Lebanese athlete Mireille Ajami is currently in full physical and mental preparation to participate in the Asian Powerlifting Championships that will take place from December 25 to 30 in Istanbul; Turkey. He trains two hours a day; six days a week: “working harder would be too exhausting on my body;” he says …

Tags:ajamidetonatesmasculinemireillequitestillworld*
previous“Find Your Parasport”, a tool at the service of professionals
nextCovid: the fifth wave puts an end to hopes for a quiet Christmas