Hakuhô, the greatest yokozuna in sumo history: a precious look at the legend

Hakuhô, the greatest yokozuna in sumo history: a precious look at the legend

Too skinny to be a sumo wrestler …

Hakuhô, Munhbat Davajargal from his real name, was born on March 11, 1985 in Ulaanbaatar, the capital of Mongolia. His father is famous in his country for winning the annual Mongolian wrestling tournament six times and becoming Mongolia’s first Olympic medalist by winning the silver medal in wrestling in Mexico City in 1968 (he had also competed in the Games Tokyo Olympics in 1964).

Hakuhô came to Japan at the age of 15 hoping to follow in the footsteps of his compatriot and first sekitori (fighter of 1me or 2me division) of Mongolian nationality from Kyokushûzan, with four other young candidates. After a training camp at Settsu Sôko (a famous amateur sumo school where future champions are often seen), he sought the opportunity to join a professional team.

However, at that time he weighed 62 kg by 175 cm. While his friends, with slightly larger sizes, were booked one after another by the highest rated stables, the team leaders had not the slightest respect for this flogger. Annoyed, he was about to head back to Mongolia when he was finally picked up by Stable Chief Miyagino-beya, a rather weak team.

When Hakuhô passed sekitoriI remember asking him how his debut was.

“At first they didn’t want to let me practice because I was too thin. I had to eat all the time to gain weight. I ate so much that I vomited, which is a sin (laughs). For me, it was even more difficult than training. “ 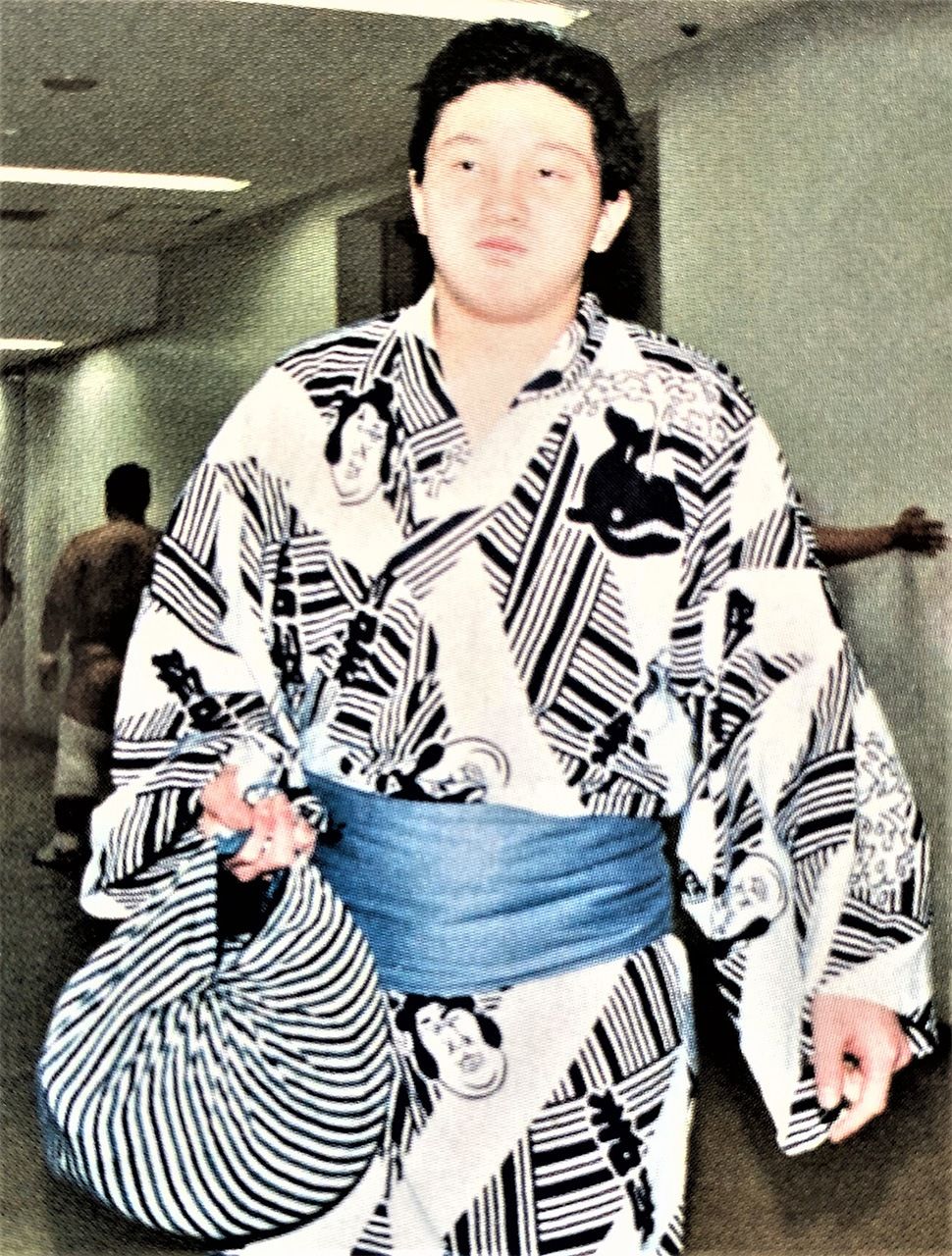 “I have a lot of fun when I fight”

His first appearance in an official tournament ring was in the 2001 spring tournament. At first, his results were very unpredictable, but his body grew stronger as he trained harder and harder, and his results were very unpredictable. Qualities inherited from his father have flourished. In just three years, at 19 years and 1 month, he left makuuchi (1me division), 4me the youngest in sumo history since the Shôwa era (1926-1989). He rose steadily through the ranks, winning 13 of 15 fights in the 2006 spring tournament as a sekiwake (two rows before the final title of yokozuna), opening the promotion to the degree ofôzeki (last rank before yokozuna). 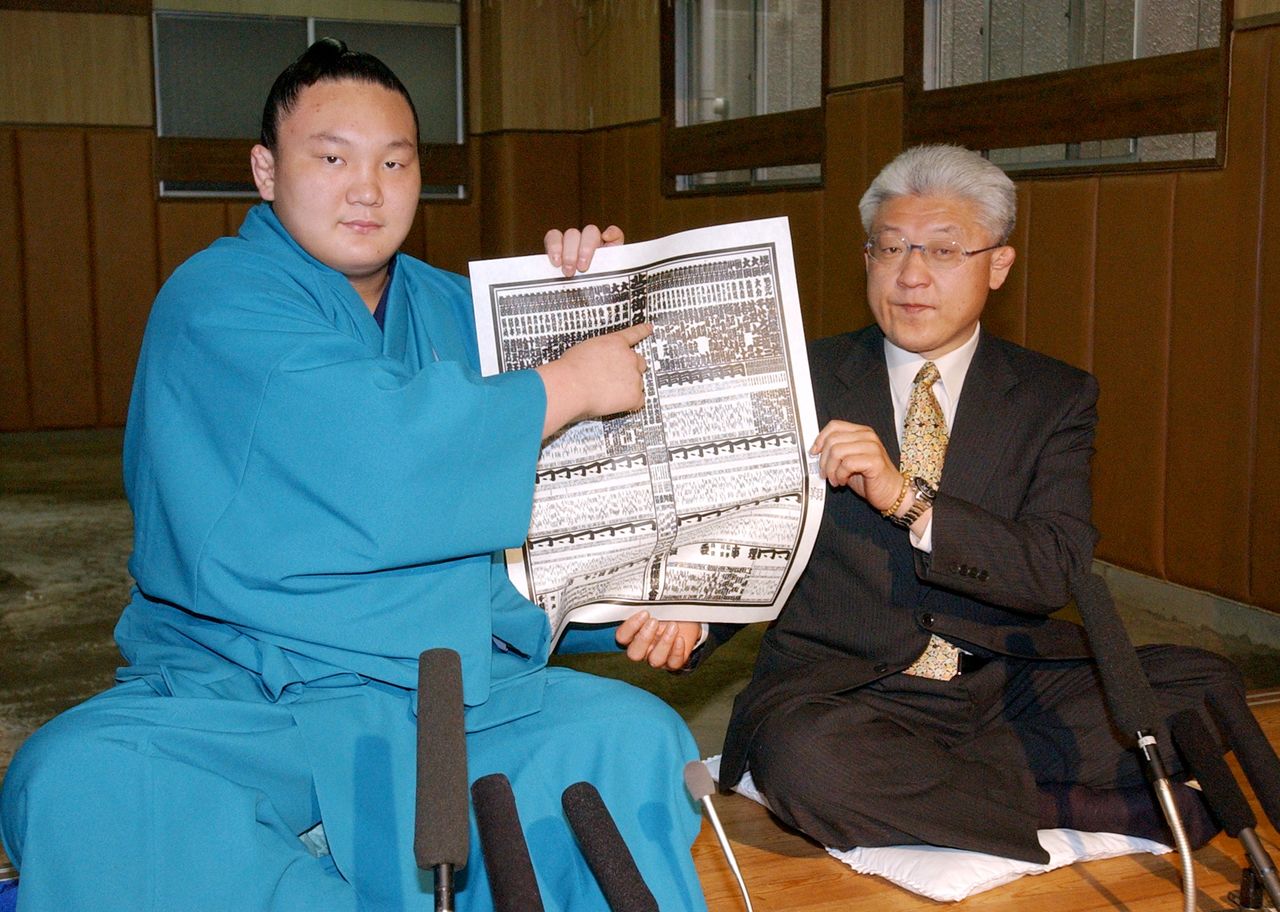 On April 26, 2004, the new makuuchi Hakuhô and his teacher, Miyagino, display the list of fighters for the summer tournament. (Hee)

Hakuhô was on the rise and was going to pass ôzeki when he said, “I have a lot of fun when I fight. I look forward to the next tournament. I must say that I have never heard a Japanese fighter show such enthusiasm. His constant desire to improve and his dedication to training are the qualities that have paved the way for him to the supreme title of yokozuna.

In the 2006 summer tournament, he narrowly missed promotion to the top rank. At the end of the tournament, he participated in a promotional tour, under the scorching sun. In 5 days, he appears in 94 fights against 94 different opponents … and he comes to tell me with an air of disappointment that he has not managed to reach the figure of 100 that he had announced as a goal!

Yokozuna, the pressure in Hawaii

At 22 years and 2 months, Hakuhô becomes the third youngest yokozuna From history. 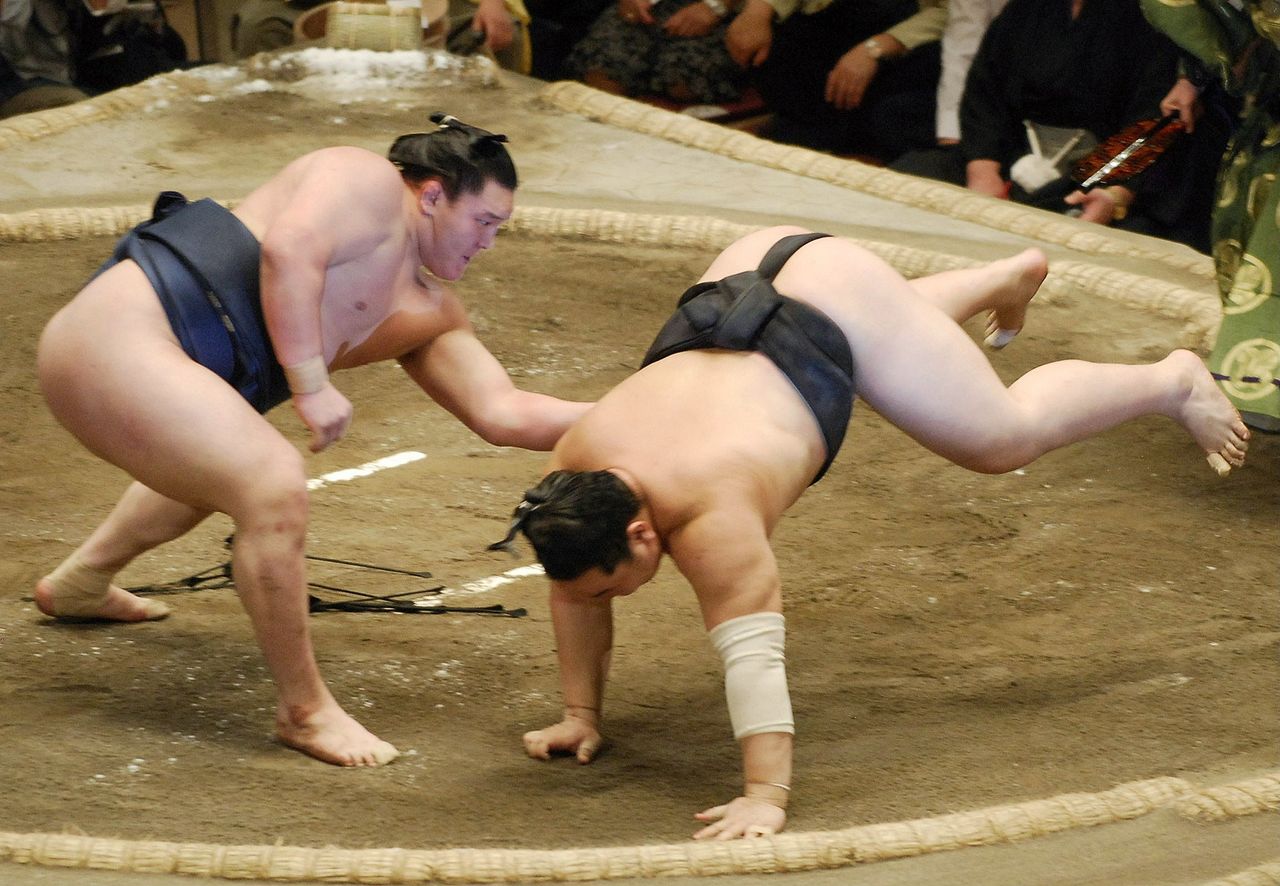 On May 27, 2007, Hakuhô (left) defeated Asashôryû and won the summer tournament, ensuring his promotion as yokozuna. (Hee) 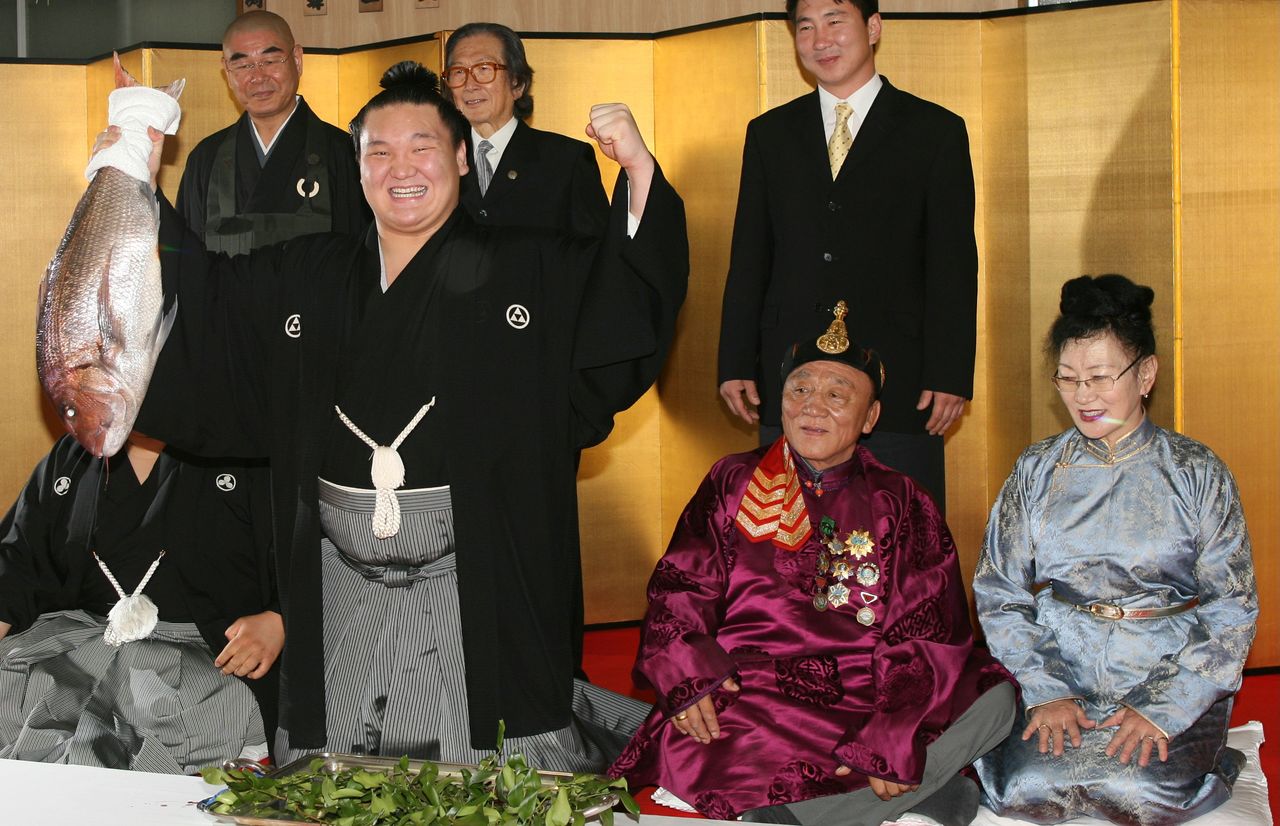 Hakuhô raises his fist as a sign of success at the Miyagino-beya facilities to celebrate his ’69 titleme Yokozuna, May 30, 2007, in the presence of his parents sitting next to him. Right: his father Munhbat and his mother Tamir) (Jiji)

The new yokozuna then he goes on a promotional tour of Hawaii, accompanied by his parents and sisters. One day off, I found Hakuhô training in a bathing suit, on the beach, with a member of the same team: “If I rest, I get weak,” he told me.

Then he looks at me and says with a smile: “You are still well preserved for your age, say so. You want to train”

Luckily I wasn’t serious, because even when I put all my strength into it, I didn’t make it move an inch. And in melee, the mass makes an unpleasant impression. In the first squeeze, I felt my hips crack and I struggled for breath.

The next moment, I found myself two more meters rolling across the sand. An earthquake, no doubt … I looked up and recognized Hakuhô’s smile in the blue sky.

We have no idea how powerful a rikishi (fighter), a yokozuna Even less. And the innocence of Hakuhô’s smile is the icing on the cake. The “first-hand” experience of this sheer force gave me incredible assurance: No journalist scares me anymore! 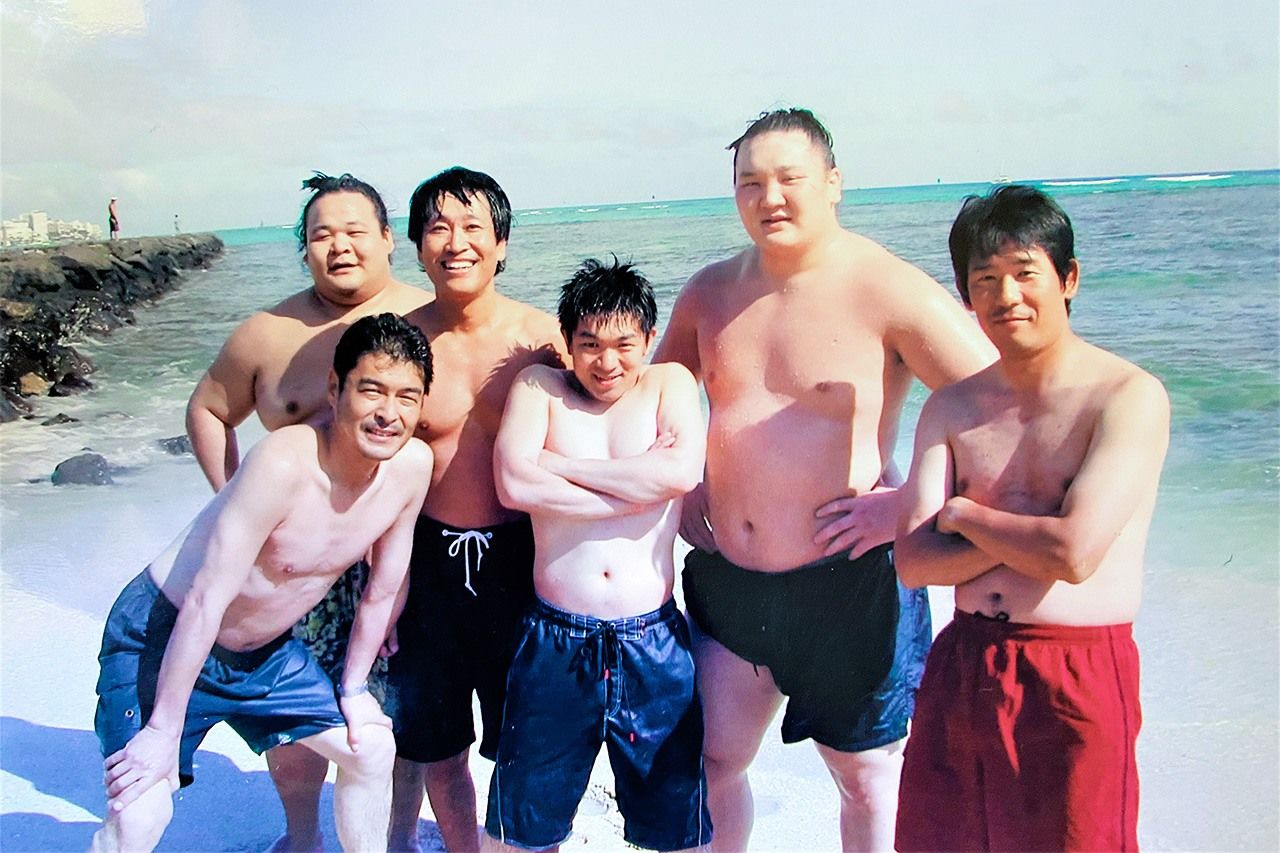 Hakuhô with journalists during a tour of Hawaii in June 2007. You don’t get to see Hakuhô in a bathing suit every day. The author of the article is third from the left. (Author’s personal photo)

An “unworthy” image for a yokozuna ?

It has often been pointed out that certain attitudes and certain words of Hakuhô were problematic, coming from a yokozuna, a title once revered as “living god”. For example, while a fighter is expected to never show his emotions in the ring, win or lose, Hakuhô would often raise his fist in victory after his fights. And his very “directive” interviews, in which he coached journalists in real oratory games, have often sparked controversy. He was considered arrogant … If you ask me, it’s a mistake. The Hakuhô I have known since its inception has always been a humorous and carefree young man who loves sumo more than anything.

In the latter part of his career, the great champion has undoubtedly turned more and more to hijiuchi (shoving) and harite (slaps) to ensure a victory, when what is expected of a yokozuna it is that he wins by the dignity of quiet force, not by violence. Personally, I rather see the sense of duty considered absolute of someone who has risen above the common man, something totally different from the champion of any other sport: “A yokozuna Never lose. “ 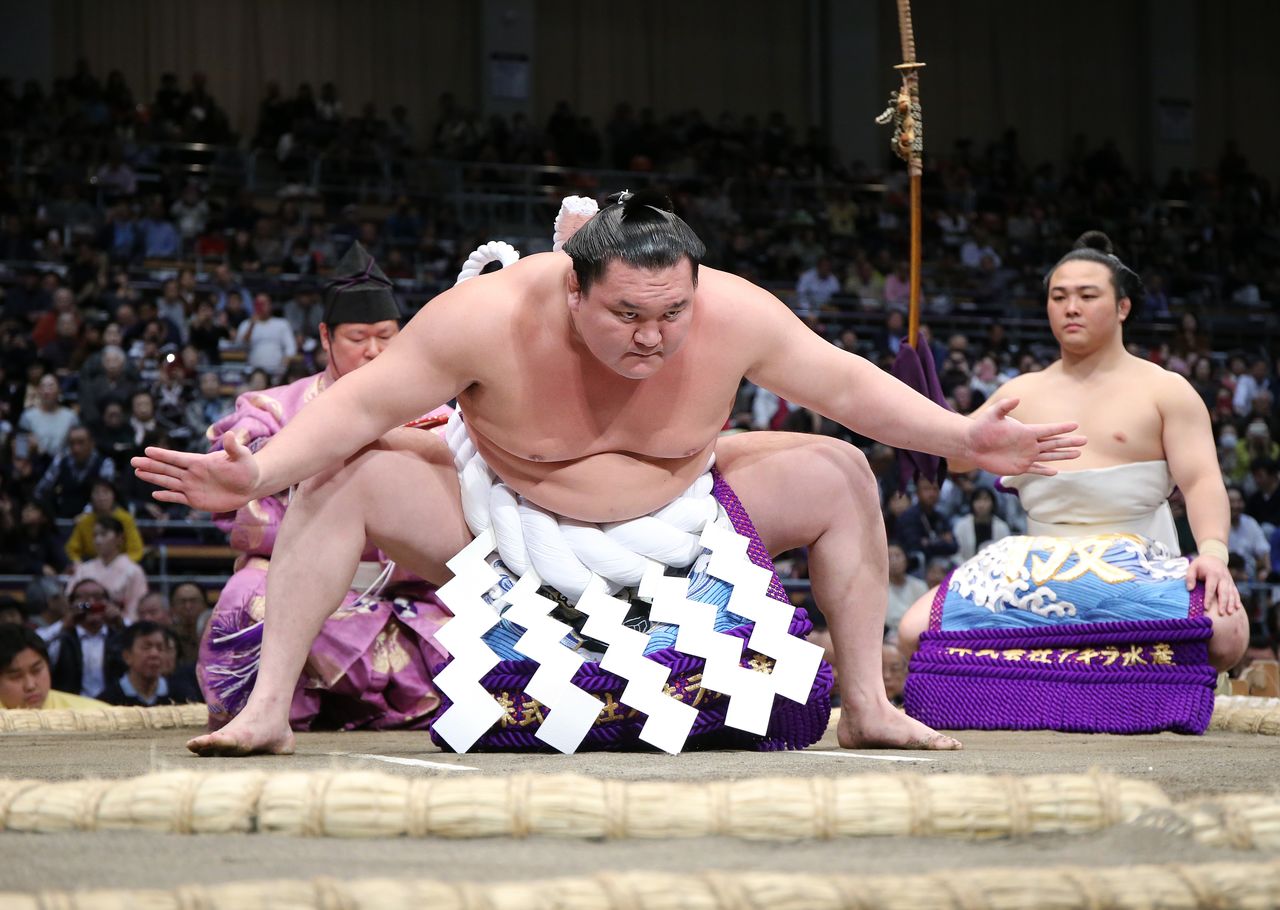 Hakuhô performs the ceremony to enter the combat ring on November 18, 2019. (Jiji)

The link between sumo and Japan, as seen by Hakuhô

Two years ago, while on a tour of Kyûshû (southwestern Japan), I had the opportunity to do an exclusive interview with Hakuhô for a magazine.

On this occasion, he explained to me the true meaning of Look, the ritual of wrestlers raising their legs high and striking the ground with their feet before a fight. “It is about eradicating the evil that is under the earth. “And he told me a spoken episode:” After the great Tohoku earthquake that caused the Fukushima catastrophe In March 2011, the aftershocks were so numerous that people no longer dared to sleep. But I went to do an entrance ring ceremony like yokozuna, and when I returned, they told me that the next day the aftershocks had completely ceased. That day I understood that there was a special connection between sumo and Japan. “

One of the secrets of Hakuhô’s success as yokozuna for over 14 years is his unwavering dedication to ancient sumo training methods, the Look and the teppô (alternate thrust with outstretched arms). He also studied the history of sumo with great interest and is more knowledgeable about the sport than Japanese wrestlers. As a result, he is in a good position to pass on the good traditions of sumo to his students. I have high hopes for his second career as magaki oyakata (the title Hakuhô obtained after his retirement). 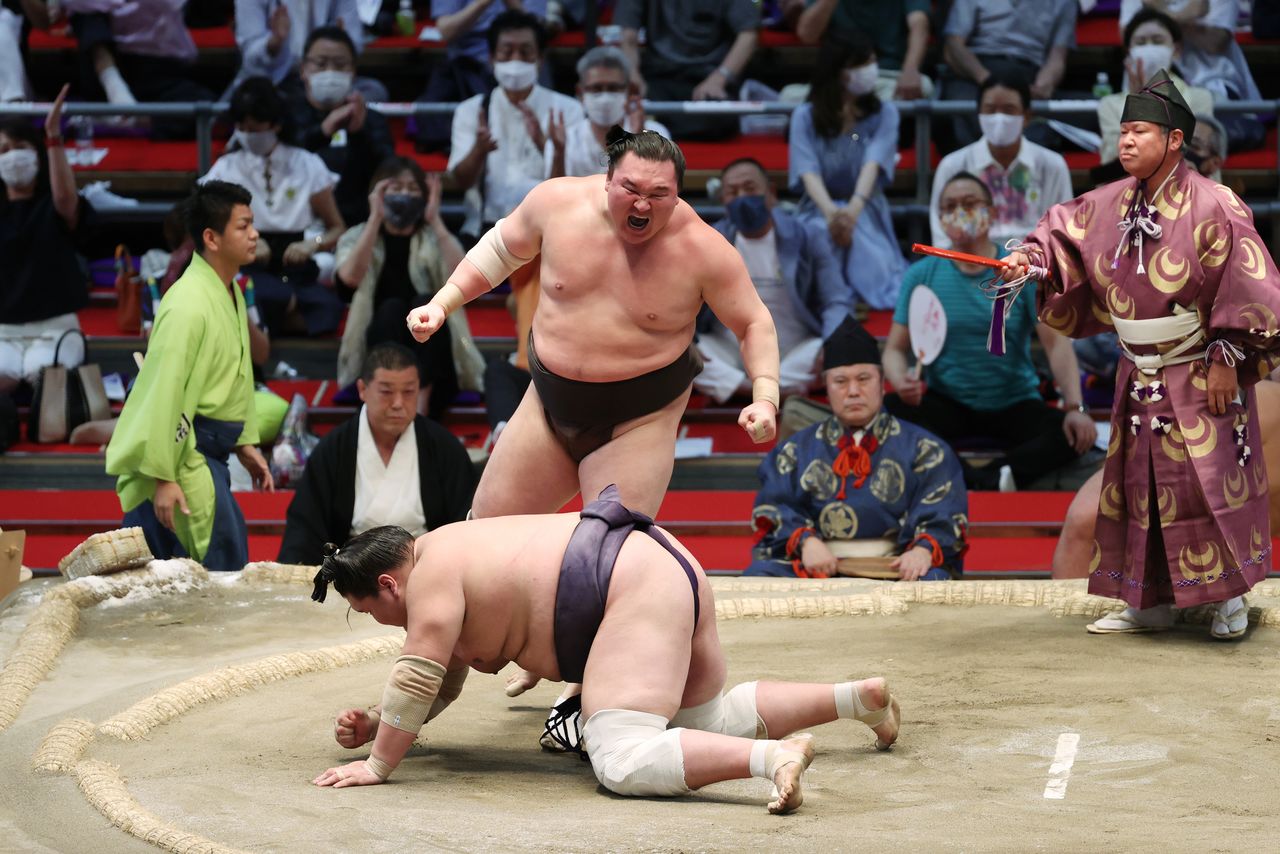 Hakuhô won the tournament in July 2021 with a perfect record of 15 wins and no losses. It was his last appearance in a tournament. (Hee)

(See also our article: A typical day in a sumo wrestling stable)

Banner photo: Hakuhô laughing after throwing Nagayama Hitoshi, the author of this article, onto a beach in Honolulu, Hawaii, in June 2007. Photo by the author)